The burrowing owls and gopher tortoise populations on campus are slowly shrinking and despite students best efforts, FAU is not doing everything it can to preserve it.

If you Google search ‘FAU preserve,’ the first result is not a link to the FAU website, but a link to a petition in favor of stopping further development on the FAU preserve. 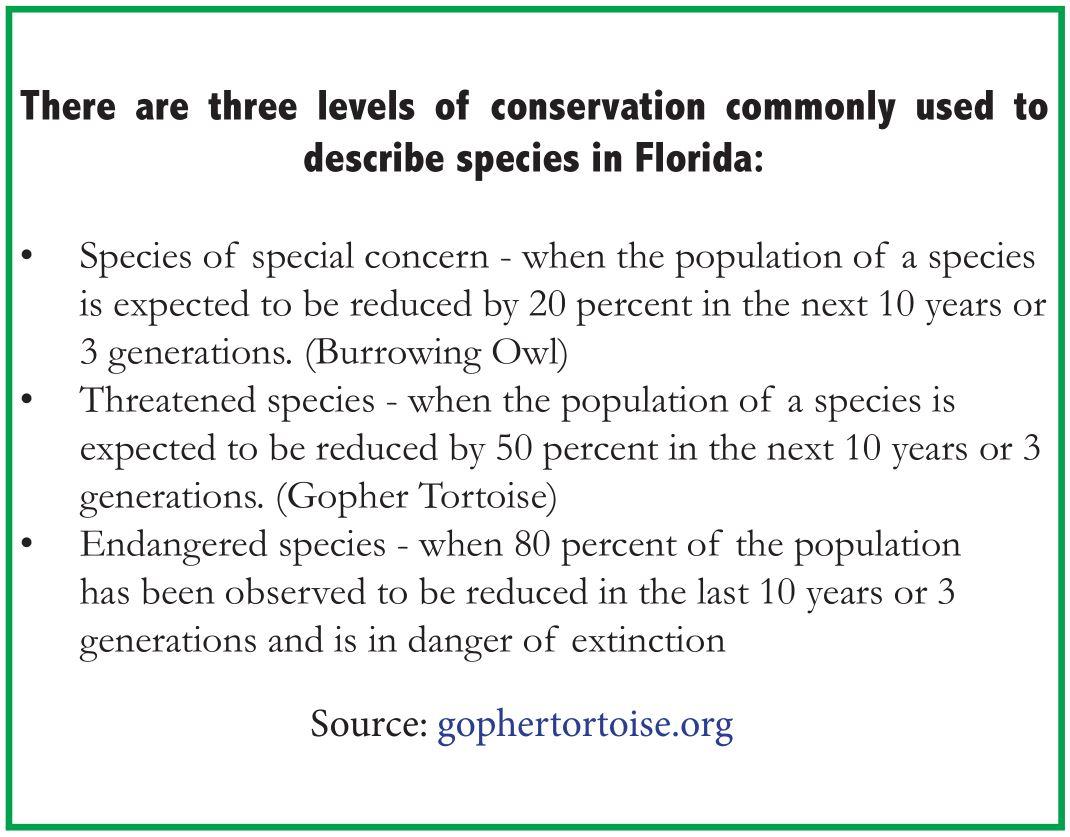 The FAU preserve is currently 90 acres of land in the upper west side of the Boca Raton campus set aside for the protected species that live there — the gopher tortoise and the burrowing owl. This petition was created by students in response to FAU repeatedly building on the preserve and relocating the animals living there. Around the rest of the campus, you’ll find grassland — the habitat of the burrowing owls — which has been built over even more than the preserve.

Over the past 20 years, FAU has dramatically downsized the preserve space on campus by building upon it. A.D. Henderson University School and the Innovation Village Apartments were built on top of the grassland as well as the football field and Parking Garage 3, which were built on top of scrub — the large preserved land that is an endangered habitat. Now, instead of the scrub that would be there, the preserve has shrunk by 50 acres to its current size of 90 acres.

FAU has not abandoned maintaining the preserve completely. Almost two years ago, the university cleared out a large area on the northern corner of the Boca campus and turned it to grassland for the burrowing owls to repopulate. As it turns out, this new land has caused the population of owls to plateau, according to Tobin Hindle, an FAU professor of ecology.

There are no records of the owl and tortoise populations from 2003-2010. According to Public Information Coordinator Liz Barraco  of the Florida Fish and Wildlife Conservation Commission, there is no policy or law stating that FAU is required to keep detailed records of the protected animal populations. Azita Dashtaki, associate vice president for facilities, is the head of the Conservation Committee that handles the decisions about the preserve. When asked about the lack of records she said, “Prior to 2010, the assessment of gopher tortoises and owls was conducted by FAU graduate students and was not included as part of a formal report to the committee.”

Because of the lack of documentation, Hindle says he has a “gut feeling that there definitely was a decent decline [in the owl population] five to eight years ago.”

The bulk of the preserve is scrub, but recently it has grown too thick, which isn’t an environment that allows the gopher tortoises — a threatened species — to survive well, says Evelyn Frazier, an FAU professor of ecology and entomology. 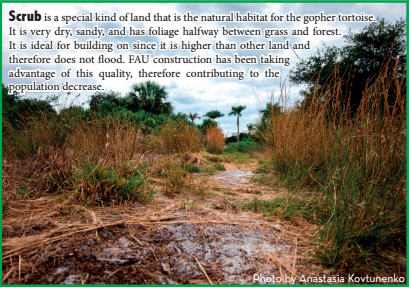 According to Hindle, a member of the FAU Conservation Committee — which makes university decisions about the preserve — there would normally be a prescribed burn in which the scrub is set on fire to thin out the foliage and help stabilize the environment for the tortoises. However, this is not a possibility because the university does not have a fire department on campus.

The alternative is to mechanically thin out the foliage to bring it back to normal levels, but FAU has not done this as of late, according to assessments by Miller Legg — an outside company that assesses the preserve every year.

According to Hindle, this would need to be done every five to seven years to mimic fire.

“It is also a costly procedure that the university deserves credit for approving,” Hindle said, citing the last time FAU mechanically thinned out the scrub as 2010.

FAU had Miller Legg start assessing the preserve in 2012 so that there were formal records on the population numbers. According to their 2014 assessment, “Based on the overall coverage of the preserve, the longevity of the suitability of the preserve area as desirable gopher tortoise habitat may come into question if mechanical thinning is not performed.”

According to Dashtaki though, “The preserve has been greatly improved over the past few years and is in a much better condition to support the gopher tortoise population.” But according to the 2013-2014 Miller Legg assessment, mechanical thinning events are necessary in making the habitat suitable for the tortoises.

This lack of mechanical funding has caused the tortoises to cluster into the only habitable area, the small strip of preserve on the east side that is not overgrown [see map]. Almost all the tortoises are squished on this one side which causes disease, parasites and ticks to spread faster, according to Frazier and her students’ research. 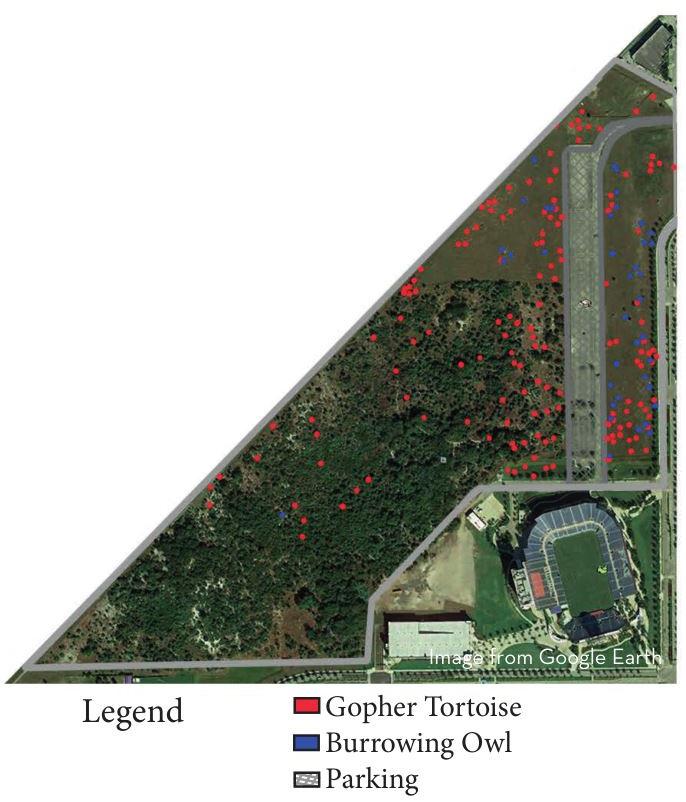 There are only about 80 tortoises in the preserve, according to Frazier, whose students do heavy research on the preserve. Florida Fish and Wildlife’s Gopher Tortoise Management Plan cites a 1987 study that recommends a minimum preserve area of 25-50 acres and at least 50 tortoises for a viable population. A 2010 study cited in the same plan states there must be 240 tortoises and 1,865 acres for the population to sustain itself. Frazier says there are more than 80 tortoises on campus, but the rest are not in the preserve. Instead, spread around where they cannot repopulate. This is a direct result of construction separating parts of the habitat and creating little islands of land that the tortoises are stuck on.

There may be an explanation for all the freedom in relocating the tortoises and taking them from their homes, according to Frazier.

“The laws that determine the treatment of the gopher tortoises were developed by Florida Fish and Wildlife, the community, very few scientists and the developers,” Frazier said.

Frazier’s students use the preserve to study the plants, the tortoises and their habits. The preserve is not only a habitat for protected species but also an important part of the classes here at FAU.

The preserve being on campus gives students the ability to go out into the field and practice what they learn in the classroom. Jessica Huffman, a recent biology graduate and former president of the Strategies for Ecology Education Diversity and Sustainability organization, says she “wouldn’t have gotten into research unless there was the preserve. It’s easy with it being right on campus.”

Huffman is also the student that spearheaded the petition to stop further development on the FAU preserve, which has over 1,500 signatures. She started using social media in March of this year to raise awareness of the shrinking preserve space and declining tortoise population. The goal is to get 10,000 students to sign the petition.

Dana Elhassani, another alumna petitioning the development on the preserve, says she “would rather have it permanently a preserve so there isn’t that constant worry.”

McKie found that owls partly survive using the tortoises’ abandoned burrows and whenever FAU builds on “inactive” burrows — burrows containing no eggs or flightless young — they are destroying the possible homes of these burrowing owls.

Destroying these burrows is deemed harmless because there are no animals living there. However, it does harm the owl population when they are forced to relocate. McKie’s thesis also found that “the number of chicks (baby owls) produced per year in a territory was strongly and positively correlated to the number of years that territory was occupied.”

Unfortunately, there is not much students can do to stop FAU from building on the preserve.

The burrowing owls and the gopher tortoises are listed species — FAU only requires permits from Florida Fish and Wildlife to relocate them and destroy their burrows. According to Hindle, FAU maintains the preserve because they are aware of its importance to the animals and the environment.

But the loss of preserve land has not discouraged Huffman and fellow students from petitioning to protect the species.

“There’s a countless number of opportunities [for] using the preserve and we are just building on it,” Huffman said. “Another reason we need to stand up for the preserve is that we are giving a voice to multiple species that can’t stand up and speak for themselves.”