In room 224k, students of Lambda United hang out and discuss homosexuality, the internet and being androgynous 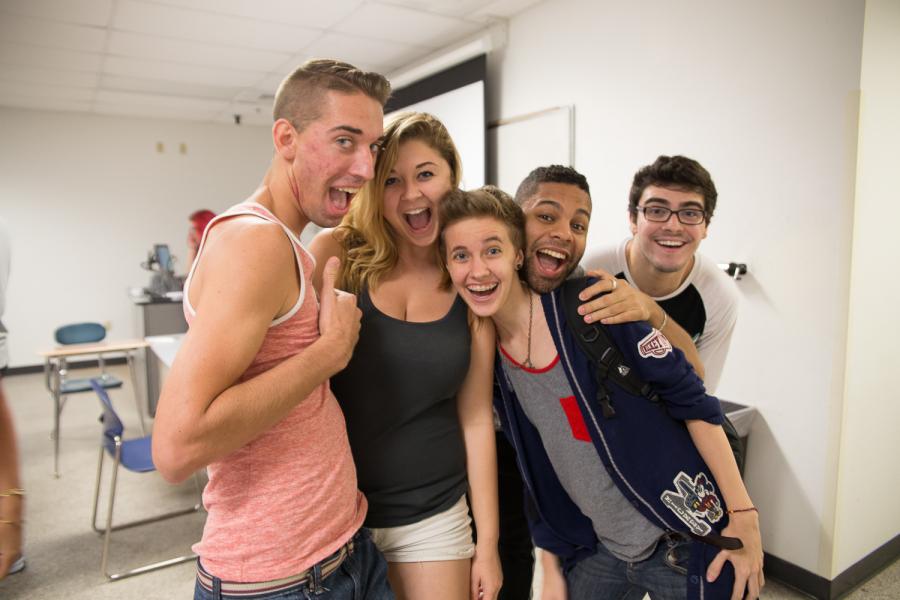 Walking into Room 224k of the Multicultural Affairs building is like walking into a dorm room, with students engaging in casual conversations, sharing dirty jokes and taking cat naps.

Unlike most dorm rooms, a desk tucked in the entrance has a bowl full of male and female condoms, LGBT flyers cover the walls along with rainbow-colored chimes hanging off the ceiling.

“My friends and I actually have this running joke that I’m only 17% gay” says Ashley Ashbaugh president of Lambda United an organization that focuses on LGBT rights on campus providing a place for all students to discuss sex, school and androgyny.

A couple of chairs are scattered throughout the room, never in any particular order, usually taking the form of whatever past conversation occurred. Here is where Lambda United meets.

“Sarah, is Andy asleep back there?” asks Ashley pointing to vice president Andy Kramer whose feet up are on the desk with her head tilted back. “She’s working on it, she’s trying,” replies treasurer Sara Cothron.

Students also talk about how to define their sexuality and their experiences being gay, bisexual, undefined or straight and share intimate secrets about their sex lives.

Ashbaugh, the president of Lambda, is an unassuming, short young lady amidst a group of Lambda members. She seems more a newcomer to the group than the leader of the organization.

A polite woman with a calm demeanor and crimson red-dyed hair, she’s in charge of Lambda and if you happened to have been at the drag show on September 19 you have her to thank.

Coming from Apopka, Fla. — a city with a population of just over 40,000 — the transition from a small town to the FAU campus was liberating, as Ashbaugh found herself able to express her own beliefs among like-minded people.

“I used to get crap all the time at home,” said Ashley. “In middle school, I used to get pushed into lockers and down the stairs. Like high school was brutal, but it was more like catty comments, cause I was on the cheerleading team.”

When a classmate in high school came out as gay and was ostracized by his friends, Ashbaugh confronted one of his friends, asking why they would do that in which he responded, “I can’t be friends with anybody who is gay.”

Erika Moylan, a member of Lambda who was within earshot when Ashbaugh mentioned this, subsequently made a raspberry noise and a jerk-off motion.  “That’s what I feel about those people.”

In the room, students are constantly changing places, sitting on top the backs of chairs and stretching their feet on the laps of others. Appearing chaotic and almost showing no structure, Ashbaugh doesn’t appear like a leader but she’s held in high regard by her peers.

“A lot of people don’t think that she gets respect from us. People are like ‘[oh my God] Lambda is so disrespectful to their president.’ No, we just like to mess with her. I invite her to my house, meaning I like her,” says Michel Rose, a self described pansexual.

Lambda United is not just for those that may fall into LGBT categories. A straight student, Wilson Malek, characterizes Ashbaugh as “Awesome music awesome person sauce”

A student yells “Wilsooon” the room begins to talk about the film “Cast Away,” Tom Hanks’ beard and whether it was funny or sad that the protagonist lost the love of his life or that he lost his volleyball in the ocean.

Film critique is not all that’s discussed in Room 224k, being the LGBTQA resource center, students also talk about being gay.

“I wake up covered in glitter and when I brush my hair rainbows just come out of my curls,” mentions Rose.

Andy moves from the desk toward the discussion in the middle of the room and mentions, “We actually have pins that say (ask me my pronoun preference)”

The room breaks into laughter, including Andy. “If one could only imagine,” she says. Andy mentions an instance where she introduced herself last semester in a chemistry lab and everyone automatically assumed she was a he for the duration of the term.

“Does that offend you?” asked the UP

“To me I don’t carry the weight. I know I’m androgynous, I can pass as a guy, like, it doesn’t matter to me,” replies Andy.

Some students are squeezing past each other to get through to the computers on the end of the room and some leaving to go to class, Moylan hugging everyone as she leaves.

Andy continues with her views on her own androgyny “People are usually surprised,” she says. “Oh you’re a girl! People call me he, I don’t care.”

Almost nothing is taboo in the room as a pair near the computers ask each other what sexual acts they’ve engaged. As more students begin to join in the discussion they reflect on the dynamics of their group.

Lambda does pride itself on privacy, taking pictures in the room can get you some glares. Even their Facebook group is private to respect those members that might not be out yet.

The room by this time is loud and their advisor politely asks them to keep it down, as the door is always open and noise dribbles down to the main office of multicultural affairs. The discussion shifts to interaction between gay and straight people.

“My biggest pet peeve is when a girl says ‘I’m interested in girls’ and a guy says ‘You haven’t had me yet’,” mentions an undisclosed person.

Malek has a different take. “I’m straight, but when a guy approaches me I’m flattered. Like whatever,” he says, while Michel tells the group that she’s had people yell at her that she’s going to hell.

The group begins to diminish as students head to class hugging one another and making plans to see each other later, others check their phones and some do their homework.

The room erupts with laughter and the discussion continues with a few students left, the door in Room 224k remains open.