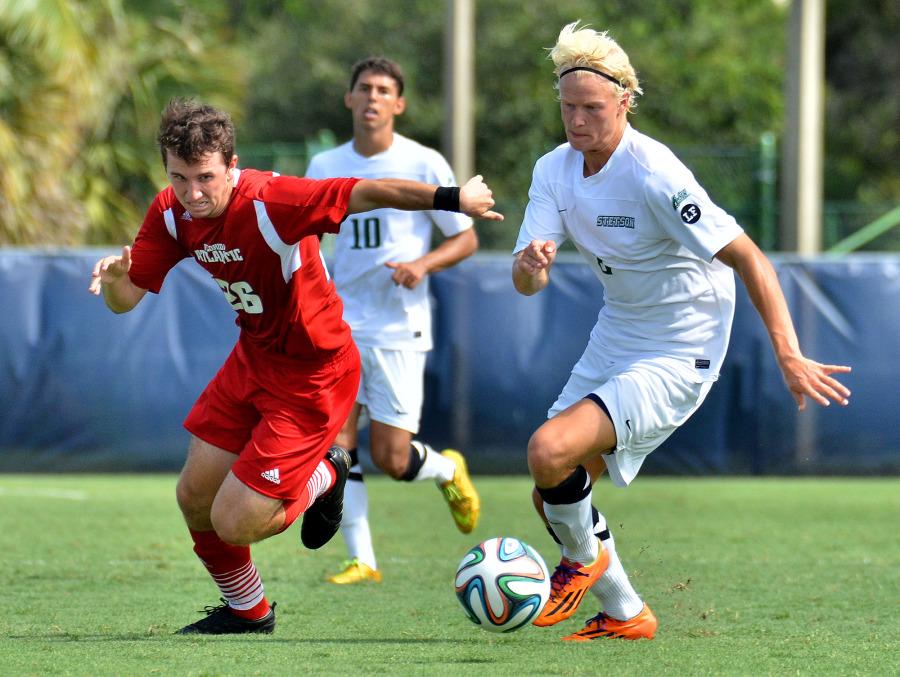 FAU is still winless at home this season. Photo by Ryan Murphy

In a soccer game, momentum can work for or against a team. The Florida Atlantic Owls (1-8-2) witnessed both sides of momentum in their overtime loss to the South Carolina Gamecocks.

USC (7-6-0) dominated possession for much of the first half, firing off five shots on goal. Just one shot had to be saved by goalie Theo Jamilloux.

FAU’s biggest moment of concern in the first half came via a South Carolina corner kick that was stopped by FAU forward Jason Fitzgerald. Fitzgerald used his head to deflect the ball away.

After that stop, FAU began to click offensively. With a corner kick opportunity in the 28th minute, midfielder Deniz Bozkurt sent a cross in to defender Kevin Burne, who headed the ball in for his first goal of the season. The score put FAU up 1 t-0.

Thirty four minutes in, Bozkurt fired in a shot that deflected off a South Carolina defender and past goalie Marco Velez to score his second goal of the game. FAU went into the half holding the game’s momentum, along with a 2-0 lead.

Near the start of the second half, Bozkurt  pounced on a deflected ball in the box to expand the FAU lead 3 to 0.

Beginning in the 60th minute, the Gamecocks fought back. Forward Eli Dent knocked home a cross from midfielder Kurtis Turner to make it a 3 to 1 game.

A careless pass by defender Hunter Pritchard in the 70th minute gave South Carolina a breakaway chance at goal. Forward Mikkel Knudson put it past Jamilloux to make the score 3-2 in favor of the Owls.

South Carolina tied the game at three after a second goal from Knudson in the 82nd minute. The teams headed into overtime deadlocked at three.

In the extra period, South Carolina defender Mahamoudou Kaba sprinted through the defense and put a shot past the keeper and scored the game winning goal for South Carolina. The final goal was one of four unanswered against FAU’s defense.

On his team’s performance, FAU coach Kos Donev stated “It was a tough loss for our team. My guys were warriors, they really fought out there. We just didn’t get the result we wanted tonight.”

“They really worked well and scored,” he said. “They created many goals, which I’m very pleased with and is great against a conference opponent. They just need to keep that hunger for goals, and we will perform well.”