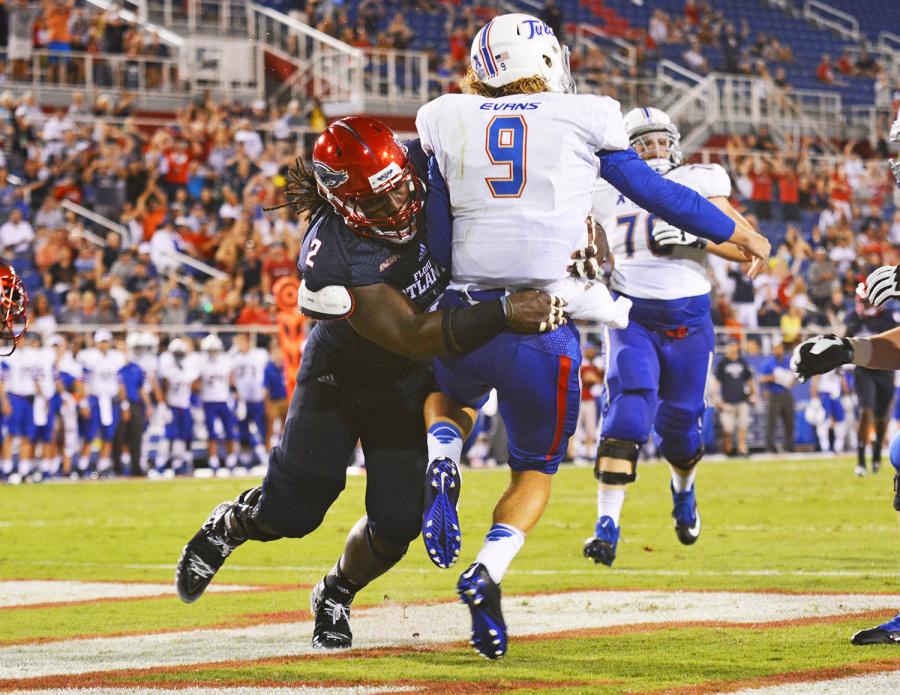 Update: Nate Taylor of the Sun-Sentinel reported on Oct. 7 that Brandin Bryant tore his right ACL in the Sep. 27 game versus UTSA. Lozandier tore the patellar tendon in his right knee. When the UP first published this story, the nature of the knee injuries to both men were unknown.

Three days after a 38-10 drumming at the hands of their rival, head football coach Charlie Partridge revealed that two starters will miss the remainder of the season due to injury. Both men have knee injuries.

Charlie Partridge announced the injuries to Chuck King of Owl Access after Sunday’s practice. Senior linebacker David Lozandier went down during the third quarter of the Oct. 2 game versus Florida International. It appeared to be an ACL tear, but the nature of his injury is not yet known.

Before the season began, Lozandier mentioned that his postgrad plans could include law school or teaching. The North Miami native also mentioned interest in becoming a Navy Seal.

Lozandier was a starting linebacker who isn’t eligible for a medical redshirt — meaning his college career has come to an end. He had 18 tackles this season, his first as a starter. Second string linebacker Freedom Whitfield will likely replace him.

Defensive tackle Brandin Bryant did not play at all in Thursday’s loss and saw his season end last year after tearing his ACL in the FAU-FIU rivalry game. The junior had 13 tackles and two sacks on the season as of Oct. 3.

Tackles Joe Henry and Shalom Ogbonda played extensively in the FIU matchup and will split the bulk of the snaps that would have otherwise gone to Bryant.

The UP will update this story as more information becomes available. If you have any news or tips for Sports editor Wesley Wright, contact him at [email protected] or on Twitter.