The Black Student Union and the Dream Defenders open the discussion on race relations, law enforcement and engaging with the community. 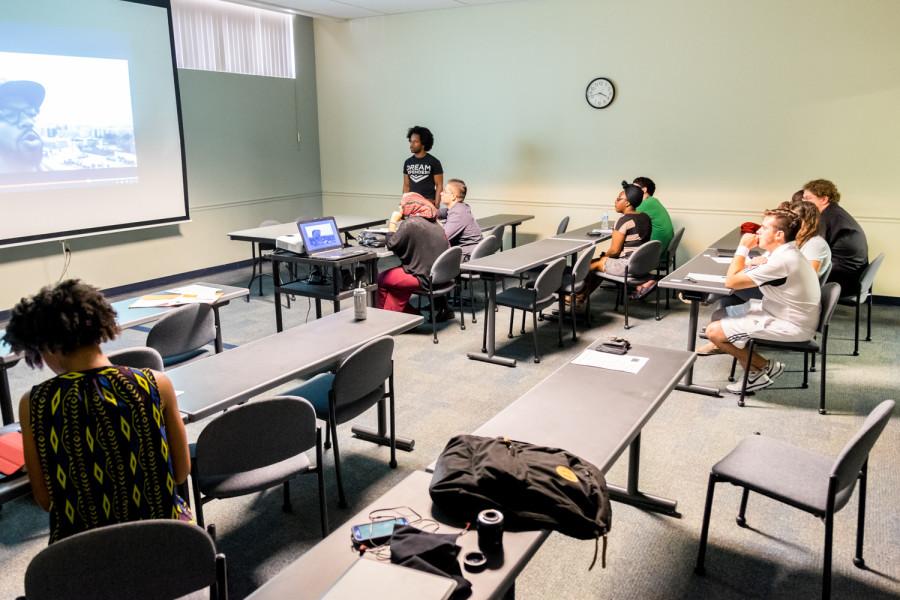 [Mohammed F Emran | Web Editor] Dream Defenders meeting. Their agenda is to defend the lives and the dignity of the youth of Florida.

A memorial was held for Brown the following night. The community gathered to vocalize their grievances; however, when police destroyed candles and flowers at the vigil, the already tense atmosphere turned violent.

Raids and protests began shortly after, and the world was quick to respond.

Palestinians tweeted citizens of Ferguson on how to cope with tear gas.  Don Lemon was shoved by a cop on live television while discussing the people’s right to protest.

The Chinese press advised America to “make extra efforts to effectively uproot racism in all fields so as to prevent tragedies from recurring.”

The Ferguson unrest was not only a national topic but a catalyst for an international discourse on race relations in America and the post 9/11 militarization of the police.

As the discussion of Ferguson and the handling of Michael Brown’s death continues, the leaders of two FAU organizations, the Black Student Union and the Dream Defenders, spoke about their opinions on the matter.

While both organizations focus on the advancement of minorities on campus, the Black Student Union, led by Cedric Brazle, promotes interactions between different ethnic groups as well as awareness of the black community.

University Press: So what are the goals of the Black Student Union on campus?

Cedric Brazle, President: Our goals on campus are to cultivate cultural unity and stagnate any cultural ignorance that people might have. We want to educate people more on who we are. Our name says it all; we’re supposed to unite people of our culture.

Q: What were your reactions to the Michael Brown shooting?

Setutsi Dennis, Historian: My reaction initially was a young man was shot. A young black man was shot — someone like me was shot.

Halston Shannon, Marketing Chair: I take a lot of pride in my race, but I value life before anything. At first, when I heard that somebody in my age group was apparently gunned down and unarmed, I wondered why this happened again. Once I heard he was a black male…like Parrish said, it shouldn’t get to the point where you tell yourself not again.

Q: Do you guys feel it was justified?

SD: I don’t think anyone outside of Michael Brown, the officer who shot him and [the] investigators [can really say]. They have all the facts. I don’t have all the facts, so I can’t say who’s justified. But I do not believe that 18-year-old Michael Brown deserved six or seven shots and to be left in the middle of the road.

Q: Has Ferguson been discussed in your club?

CB: Actually we’ll be discussing it more thoroughly on Tuesday, Sept. 9 in the Palmetto Palm room at 5:30 p.m. It’s going to be our first topic this semester. I feel like now [is] a better time to talk about it.

Q: How do you guys feel about the reaction of the Ferguson citizens after the Michael Brown shooting?

Katherine Claude (Co-Vice President): I remember hearing that only a few of the people rioting were from Ferguson, everyone else was from out of town. I feel that Ferguson citizens are trying to take a more civil approach, but we as a culture are doing things that are worsening the situation. We need to take a step back and see what we could do differently as far as black culture, without rioting.

Q: What were your reactions to the Ferguson Police department and their presence?

CB: Some of the things were kinda harsh, like the wooden bullets. I saw a lot of pictures where people had very deep wounds. [The] tear gas, tanks and all the armor worn by police, I feel that in some aspects it was taken too far.

Q: What do you think about the militarization of police departments?

SD: As upsetting as it is to look at, you also have to think about everyday citizens and the gun laws that are passed in society. While [a militarized police force is] scaring people with their visuals, they are arming themselves because citizens can acquire guns.

CB: When you have people from other countries going through what they’re going through, giving us suggestions on how to deal with tear gas, that’s something serious. Clearly something is happening that’s not supposed to.

Q: How about the coverage of Ferguson by the media?

CB: Where do I start? [laughs]

MW: I feel the media can’t be trusted. Everyday there’s a new “fact” about this case. There’s only two people that truly know what happened and one of them is dead.

PD: I feel like anything with media involved [is biased]. Everyone is going to have their personal intent behind what they’re saying or who they want to reach. It can’t be trusted. The media is just there to play along with the rest of the circus.

Q: Speaking of media, do you feel the black youth in America are portrayed in a different manner?

CB: How many TV shows that are predominantly black are positive? [I] can’t name many. Media shows you what people expect and that’s [the public’s] image of an entire race. It’s the only thing they see.

Q: How are African Americans portrayed at FAU?

Q: Is there a difference in being a black student compared to other ethnicities?

CB: I don’t think there’s a lot of difference, but we’re all stereotyped.

HS: I don’t feel any type of way about being a black student. I’m just a student that wants to be involved.

PD: Here [at] FAU, [I] personally don’t feel my race sets me back. It’s a very diverse campus.

Q: Is there a stigma for being in the Black Student Union?

CB: Some people ask me how I would feel if there was a white student union.

PD: [When] we introduce our organization, the first question almost every time [is] “Do you have to be black?” Our meetings are for everybody. We’re just doing what our organization was made to do, but it’s not pertaining to people who look like us.

CB: We’re not pushing on any other races. [We’re] just trying to make our [race] understand how great they are, that’s it.

Q: Is there anything you guys would like to add?

University Press: What exactly are the dream defenders?

Graham Brown: Dream Defenders is a social justice group that’s led by college students. Our agenda is defending the lives and the dignity of the youth of Florida, particularly black and brown youth, [as well as] holding accountable all the entities that are supposed to protect and nurture the youth, like the educational system [and] police departments.

Q: What was your reaction to the Michael Brown shooting?

A: Disgust. It sounds dark, but I was not surprised. This happens over and over again. We’re living in a post Trayvon [Martin] era. We had Jordan Davis, Eric Gardner, John Crawford and Michael Brown — all just this year. It keeps on happening and I want us to get to this point where we can recognize, as a society, that there’s something wrong with the system. You can’t say the system is broken when the system was not made to protect you.

Q: How did you feel about the reaction of Ferguson citizens on the Michael Brown shooting?

A: If you’re an American citizen, you should have the right to peacefully protest. They [were] within their rights. My concern when it came after Michael Brown’s death was with the police — how they were controlling the riots and their interactions with the citizens — and the media — how it was covered and things [were] phrased.

Q: What do you think about the militarization of the police?

A: Militarization of our police departments creates a huge social barrier between the police and the communities that they’re supposed to serve. A police department should not be at war with its citizens.

Q: How do you feel black people are portrayed in America?

A: Someone said it just today. In America, if you’re young and black you’re not allowed to have a bad day. Our fashion, our walk, our emotions, our very bodies are being policed on a regular basis. I’ve been stopped by the police before, and without anything incriminating on me, my hands shake. [I’ve] done nothing wrong and I don’t feel safe. That’s not ok.

Q: How about being black on FAU?

A: I can honestly say I haven’t been harassed or persecuted on campus, but I have had moments and discussions where I realized there are divisions along racial lines. We do not live in a post-racial society. We are [still] so divided.

Q: What do you hope will be the future of African American relations in America?

A: MLK said it best, right? [I hope] we can all sit at the table one day and that we’ll have equal opportunity and be judged not by the color of our skin but by the content of our character.

University Press: What was your reaction to the Michael Brown shooting?

Q: Have the dream defenders talked about the Michael brown shooting?

Q: How did you feel about the reaction of the Ferguson citizens and the rioting?

A: I feel it was the citizens’ way of being heard and taking actions into their [own] hands.

Q: How do you feel about the militarized presence of the Ferguson Police department?

A: It’s all too much. Using military tactics on your citizens [is] very uncalled for. It’s using terror tactics against your own people.

Q: How do you feel about the portrayal of the Ferguson citizens by the media?

A: I feel they’re portrayed as if they are criminals. They’re citizens who’ve had enough of the injustices going on in their community and they’re wrongly crucified. They’re upset.

Q: Do you think the black youth and people of color are portrayed in a different manner than other ethnicities in America?

A: Yes.I feel that people of color aren’t treated with the same opportunities. They’re portrayed as more aggressive, more thuggish than our white counterparts, which is basically not true.

Q: Do you think people of color in FAU are treated differently than their white counterparts?

A: I see a lot of diversity on campus, I’m happy to say. We’re diverse and we learn about every race and background. I like that about FAU because I’m from North Carolina [and] there’s really not much diversity there.

For students interested in learning more about these organizations or joining the discussion on the topic of Ferguson, the Black Student Union will be having a meeting on Sept. 9 at 5:30 p.m. in the Palmetto Palm Room.