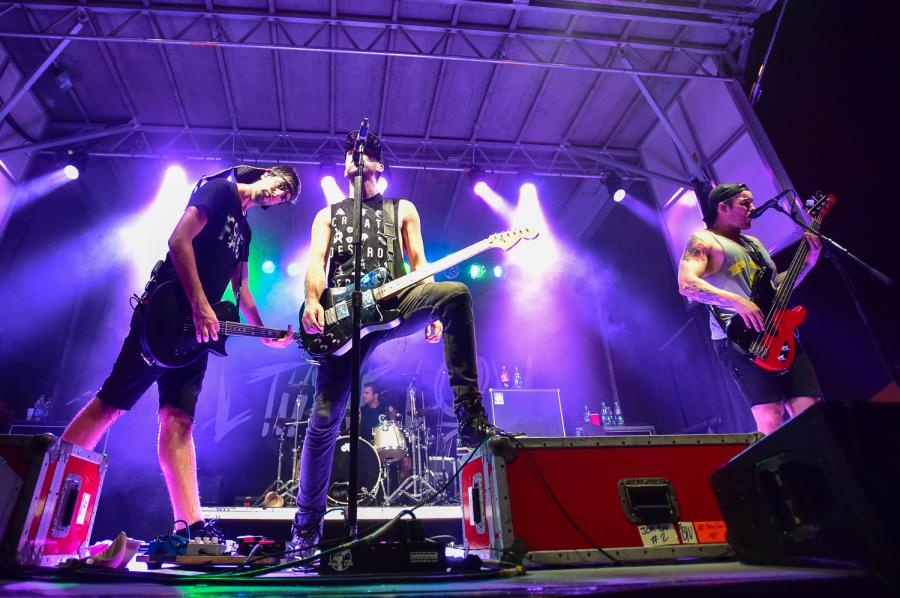 All Time low performed hits such as their 2008 single, “Dear Maria, Count Me In,” and “Backseat Serenade.” In an exclusive interview with the UP, vocalist Alex Gaskarth revealed his #1 hangover cure to be infant drink, “Pedialyte.” [Photo by Max Jackson]

All Time Low’s drummer Rian Dawson doesn’t look like a zoo animal — but he might know what it feels like to be one, based on his experience at FAU’s Bonfire.

On Friday night, Sept. 12, FAU held its seventh annual bonfire concert. The fire was in full effect as President John Kelly took the stage in a red FAU t-shirt.

“Everyone goes to sleep at night,” Kelly started. “But owls’ eyes are open, right?” The crowd cheered and Kelly went on to introduce FAU head football coach Charlie Partridge and the team captains.

Too bad a majority of the girls in the audience were looking in the other direction. As Partridge introduced his players, Dawson, whose band was headlining, was busy mixing his drums’ mics from the soundboard.

As he fine-tuned levels on the board from side stage, a string of girls had their eyes (and iPhones) locked on Dawson from behind the barricade. They called his name and they begged for smiles, all over Partridge’s talk. One older woman even yelled, “One shot for my daughter’s 15th birthday — PLEASE!” Dawson avoided eye contact like a champ.

But before any of that happened, the event’s flame was almost a washout.

It was like a scene from a movie. Orlando based ska-punk band The Supervillains were playing their version of Billy Joel’s “Movin’ Out.”

“FAU, how you doin’?” yelled lead singer Scott Suldo. The song was coming to a close with a heavy breakdown as fists pumped in the air, and cold rain fell from the sky. “Fuck the rain!” screamed the band’s drummer Dom Maresco.

Stage right, sound engineers were racing to cover their boards with tarps and keep everything as dry as possible — and it wasn’t going well. “We’re out of tarps,” yelled one technician to the group. Through all the commotion, The Supervillains played like nothing was wrong. “People that are running weren’t born in Florida,” the band joked as they continued to play.

“The Supervillains were really cool,” freshman engineering major Melissa Newell said. “I liked their sound. It was the first time I had listened to them and I really loved it.” The Bonfire, which has been hosted by Program Board since 2007, was Newell’s first concert.

By the time The Supervillains began their performance, the crowd was already a couple thousand strong. The four piece group formed in 1998 and is known for its reggae sound. They played songs like “Car Sex (Get it On),” “Smoke ‘Em,” and a cover of The Pixies’ “Where is My Mind.” As they performed, students danced and puffs of smoke gracefully floated above their heads.

As the cold rain comes down even harder, security dawns ponchos, some students bolt for a nearby parking garage, and an exasperated sound engineer ducks his head under the tarp covering the soundboard to continue to mix the band.

It’s a silly but commendable sight, dedication to getting the perfect mix even in the pouring rain, with part of the crowd running for cover, and nothing in sight but a man’s butt in the air as the rest of his body is covered by a brown tarp with a low glow from the board’s lights.

Before the rain hit around 9:20 p.m., some would have argued it was a perfect night for a bonfire. For one of the first times all summer, Boca had finally hit the 70s. There was a subtle breeze blowing, and a rainbow stretched across the sky. Outdoor shows are never easy — “They’re really hard,” drummer for opening band The Attack, Tito Esquiaqui said. “It’s more like a battle than a show when it comes to the sound.” But this one was looking pretty promising.

Orlando punk rock band The Attack took the stage to about 300 people. The band, who prides themselves on bringing “punk back to the basics,” played a mix of older songs, songs off their new EP “Under the Gun” (which released four months ago), as well as an amped up version of the Clash’s “This is Radio Clash.” The Attack played at FAU’s bonfire two years ago, opening for the Misfits.

The budget for this year’s bonfire performances was $45,000 according to the event’s organizer and Assistant Director of Student Involvement Mike Burdman. That included $2,400 toward fire juggling group A Different Spin, hired to keep the crowd occupied during set changes. “[We] got them to build excitement and fill time during the changeover,” Burdman said.

Unfortunately, as the group’s routine hit its third nondescript techno song, they had already lost most of their audience. By the end of their routine, which lasted about half an hour, anyone not toward the front of the group — who performed at ground level — was too busy finding a good place to stand for the next band’s set. Kind of a shame since these guys were juggling balls of fire in the air.

“I completely lost [connection to] the system laptop, so I don’t have any control of the amps,” said a sound engineer drenched from head to toe. Other techs scrambled to throw power strips into crates and to drag equipment away from exposure to the elements.

At 10:15 p.m., All Time Low took the stage, following multiple chants of their name. The crowd came to a roar, jumping in union, and climbing on shoulders as the band played “The Reckless and the Brave.” “We feed off the audience like sexual vampires,” Gaskarth told the UP in an interview before the show.

“It’s like fucking Armageddon out here tonight!” yelled lead singer Alex Gaskarth. The band had a huge stage presence, full of posi-jumps and crowd interaction. Six years after their single that put them on the map “Dear Maria, Count Me In” released, they’re still that same joke-cracking, pretty boy, hornball four piece from Baltimore, just with a bigger following.

Fifteen minutes into the set, guitarist Jack Barakat already had four bras hanging from his microphone stand. He joked to the audience “I will not be happy until I have 2 people making love to me while an alligator gnaws off my leg.” Gaskarth and Barakat played off of each other — and the girls in the crowd — the entire night with lines like, “Hey, I’m gonna be teaching a class on Monday. It’s gonna be how to receive oral sex while surfing,” and, “How am I supposed to play guitar with an erection?”

The group, who hasn’t put out an album since their 2012 release “Don’t Panic,” announced to the audience that they would be in the studio within a week to work on a new release. They’re also co-headlining a tour throughout the United Kingdom with alternative band You Me at Six in February and releasing a DVD.

“We haven’t done a show in a really long time,” Gaskarth told the crowd. “When they asked us ‘Do you wanna do a college show in Florida?’ we were like, ‘Holy shit, yes.’”

All Time Low closed with “Dear Maria, Count Me In,” an impromptu FAU chant, and 10 bras in Barakat’s corner of the stage.

[Emily Creighton contributed to the reporting of this story]