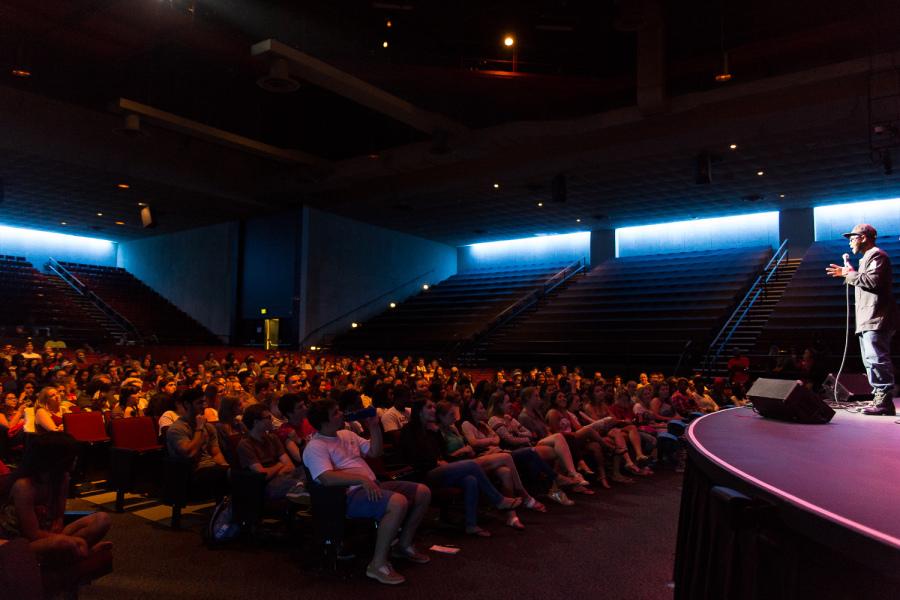 “Get Low” by Lil Jon & the East Side Boyz was booming in the Barry Kaye auditorium as DJ Damon Aiken threw beanies and lanyards at a crowd of FAU students.

Benjamin opened the show and set the tone for the night. The Carol City, Fla. native joked about everything, from the struggles of finding parking in college to impersonations of Lil Wayne and Bruno Mars.

He even mocked the audience for not cheering as soon as he walked on stage, commanding them to greet him with applause as he returned behind the curtains and entered the stage a second time.

The second comedian, Taylor, hit the stage accompanied by two dancers at his side while J Dash’s “WOP” blasted through the speakers.

Taylor was energetic, dashing on stage while commenting on race relations, telling the white portion of the audience “Don’t be too loud, I just watched Django.”

Taylor even picked a student to come on stage so he could perform a lap dance for her. He stopped to answer his phone mid-gyration, telling his girlfriend that he would be home as soon as the show ended.

From pulling out as a birth control technique to discussing the upcoming vote on the legalization of marijuana, Taylor pandered to his audience. “I liked the penis jokes,” said criminal justice major Amanda Libman.

“I’m so white, I have this tattoo because I get eczema,” he said. Later, he yelled that he looked like a beer pong champion douchebag wearing a picnic blanket.

Distefano shared stories about growing up as the only white kid in Bushwick, having a neighbor who owned a penguin and even having his chest punched by the girl to which he lost his virginity because he couldn’t perform in the moment.

To end his set, Chris answered questions from FAU students. Regarding his thoughts on how to combat depression, he said, “just do comedy or Xanax.”

Distefano also mentioned that his undergraduate studies in college were in psychology, and confirmed rumors that he broke up with his “Girl Code” co-star Carly Aquilino.

After the show, Distefano exchanged pleasantries with fans on the side of the stage. “[Chris] did jokes on the spot and loved interacting with people,” said Julian Martin, a business major.

Students appeared to have enjoyed the show. “I just had an exam, so coming out here was a great way to blow off steam,” said pre-med student Annalise Thermitus.