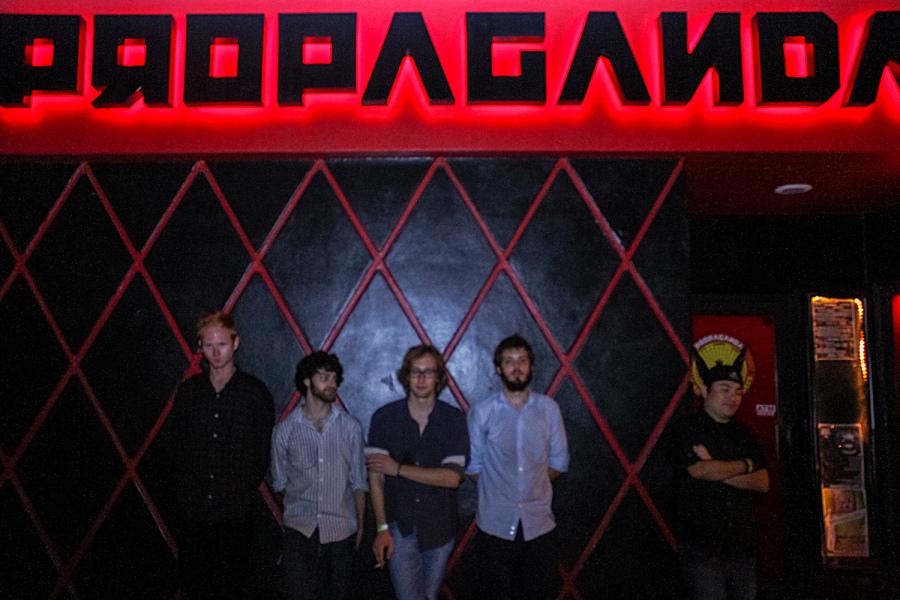 On Friday, Sept. 5, Fuzzhound – a South Florida based band signed to FAU’s Hoot/Wisdom Recordings – headlined a concert at Propaganda in Lake Worth. With an EP due for release in the near future, they’re taking every chance they can get to play in front of their fans.

The rock power-trio formed in January 2014, and they’ve been playing shows ever since. However, Friday night was Fuzzhound’s first show as a band alongside their new  pianist/saxophonist, Jordan Duke. Duke is a music performance major at FAU. He fine-tuned his musical talent at the New Orleans Center for Creative Arts and has played alongside famous musical acts, such as Delfeayo Marsalis & The Uptown Jazz Orchestra. As a 10-year veteran to the professional music scene, he hopes to “perpetuate the Fuzzhound sound.”

To those of you who frequent the underground music scene, Fuzzhound’s psychedelic hard rock melodies may have already warped your minds into hyperspeed. Being one of few jam bands from FAU equipped with advanced jazz and blues rock techniques, Fuzzhound has brought a revival of ‘70s rock to the music scene.

“We’re pretty much playing rock music with a strong psychedelic rock influence from bands like Led Zeppelin and the Jimi Hendrix Experience, as well as more modern acts like Tame Impala,” explains Austen Erblat, the band’s drummer. The band also achieves a multi-layered, psychedelic sound through a blend of various effects pedals.

“I like to go beyond providing the low end by adding melodic elements to my bass lines,” says Dale Pohly, Fuzzhound’s bass player. “I also like to use effects pedals that are somewhat uncommon to bass, such as wah, delay, and flange.”

Along with the musical technicalities within their songs, the band incorporates elements of improvisation that may captivate listeners in the crowd. On songs like “In Memory of Elizabeth Reed,” by The Allman Brothers, each musician took turns ripping through solos as if they were in their garage. Each song in the setlist flowed seamlessly into the next, in one giant jam session.

The band members’ musical background – which ranges from bebop, bluegrass, metal, and funk – gives their shows a richly diverse flavor for various tastes in music among the audience.

“We want as much of our compositions and performances to be organic, constantly changing, and improving,” mentions Erblat. “There may be a lot of things going on, but when it comes down to it we’re just playing rock ‘n’ roll.”

Duke is very enthusiastic about being a part of Fuzzhound, and describes the playing experience as “dropping in on a wave and getting sooo pitted.”

Pohly says “adding Jordan Duke feels like a natural thing to do. He’s an extremely talented musician and adds so much depth to our sound. What he does with his instruments blows me away and makes me honored to call him a band mate.”