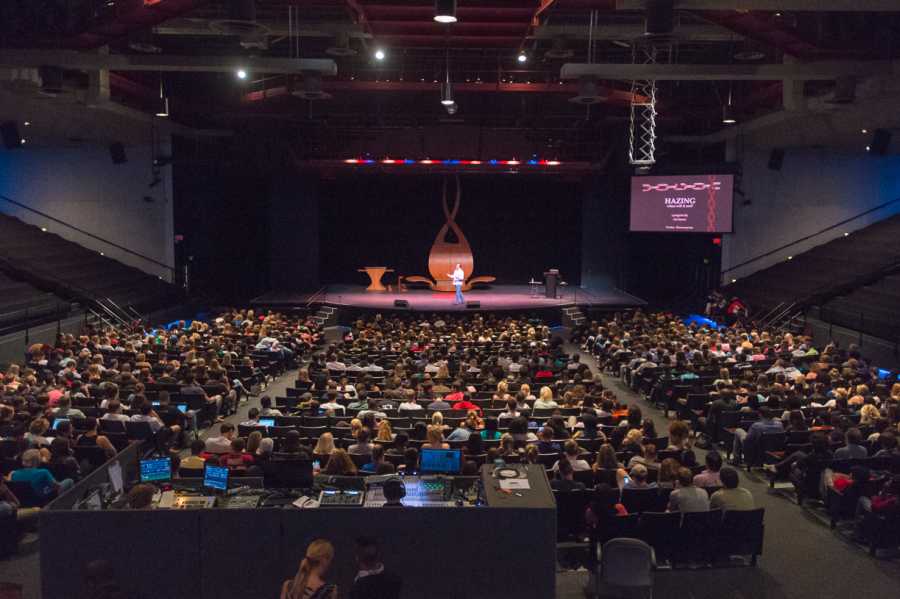 The line to enter the Carole and Barry Kaye Auditorium wrapped around the first floor of the Student Union, comprised of FAU students donning Greek letters, some with tailored suits and the occasional Kappa Kane, a red and white cane carried by members of Kappa Alpha Psi.

Most students sat with their organizations while stragglers filled the seats in the upper levels.

“It’s important,” said Delta Phi Epsilon member Jenn Dunn of the seminar. “Some people think [hazing] is necessary to join a sorority when it’s not.” She added that her seminar attendance was mandated.

When asked how he felt about hazing, Byron Knight, a Kappa Alpha Psi, told the UP “I don’t think there’s a place for it.” Knight also mentioned that attendance was required.

The event started with King thanking students for showing up and taking an Instagram picture with the audience and Greeks throwing up the respective hand signs of their fraternity or sorority.

The crowd was shown a video of several leaders of Greek life denouncing hazing, including Student Government President Michael Cepeda of Sigma Chi. At times, the audio was drowned out by sections cheering when their representatives appeared on screen.

Soon after, educational speaker Rick Barnes took to the stage. Barnes joked with the audience, asking “Which one of ya’ll just walked in to hear someone talk about hazing?” Three people raised their hand.

“It’s necessary in a way, but not in a way that endangers the students,” said Anthony Marascor, an affiliate of Alpha Psi Lambda, when asked how he felt about hazing.

Sherman mentioned that the seminar was meaningful, “especially with this guy [Barnes], he’s really good.” Sherman told the UP that the event was mandatory for new members of Pi Kappa Phi.

Barnes spoke about his experiences in college, his time in Farmhouse International Fraternity, and appealed to students’ connection with social media. “People say the dumbest shit on Yik Yak,” adding that he saw a post on FAU’s Yik Yak that read “I’m going to a talk where someone’s going to teach me how to haze.”

At that point most students pulled out their phones and checked the social app, few putting them away after.

The seminar continued with Barnes discussing the state law on hazing and mentioning fraternity pledge Matt Carrington’s death in February 2005 by water intoxication as an initiation ritual by the Chi Tau fraternity at California State University.

An hour into the seminar, students began to leave the auditorium.

Haleigh Raulerson and Mary Little, both Alpha Xi Deltas, told the UP “we have to leave early for homework.” Two Alpha Delta Pi members were also seen leaving the auditorium. When asked if they felt the anti-hazing seminar was required, they responded with “we’re not allowed to say.”

Once the event was over at 8:30 p.m, about a quarter of its original audience had left.

As Barnes thanked everyone for coming, the crowd quickly made its way to the Student Union.

“We watch anime. It’s not relatable to us” said Vivian Leung, a member of the Japanese Animation and Multimedia Society. “We’re only here because it’s mandatory for our budget.”