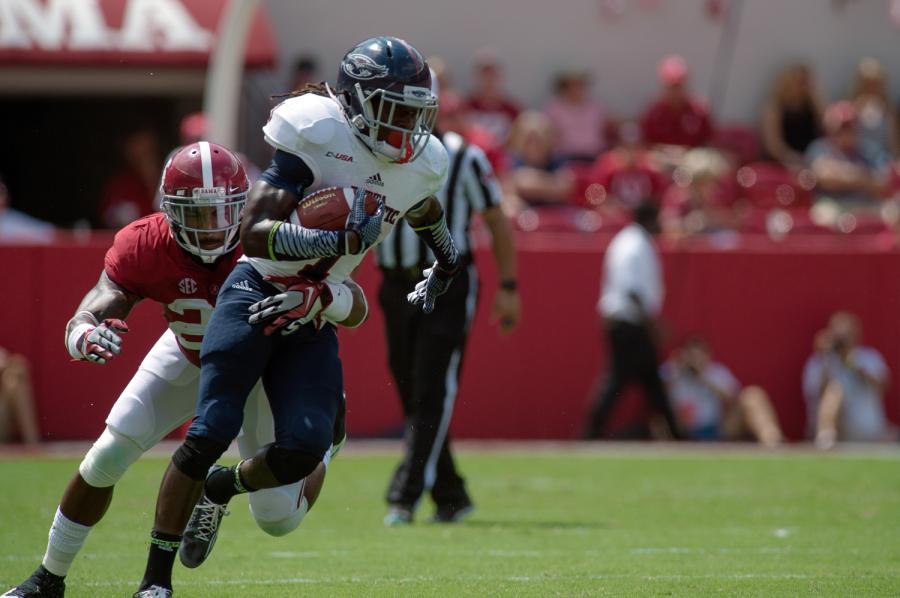 Lucky Whitehead amassed 200 yards of total offense on the game. He was one of the only bright spots for the Owls, who lost 20-19 to the Wyoming Cowboys on Sept. 20. Photo by Max Jackson

A 20-19 loss to Wyoming dropped the FAU Owls to 1-3 this season, identical to where the team was at this time last year under now-departed coach Carl Pelini.

Wyoming (3-1) moved down the field with relative ease, and their first drive culminated with a 1-yard touchdown run by Shaun Wick.

FAU kicker Greg Joseph produced the only points for the Owls in the first half, where FAU outgained Wyoming 199 to 151.

Trailing 10-6 in the third quarter, Lucky Whitehead took a punt return back to the Wyoming 14-yard line, where quarterback Jaquez Johnson scored via a 14-yard run on the first play of the drive. After an extra point by Joseph, FAU led 13-10.

Early in the fourth quarter, a long run put Wyoming in FAU territory. They scored, taking a 17-16 lead with 14:56 to go in the game.

FAU regained the lead after a 33-yard field goal by Joseph put the Owls up 19-17 with 8:33 left. He converted four field goals in the game, the longest being from 43 yards out.

A sack by defensive end Trey Hendrickson on the fourth down stifled a Wyoming drive with just over two minutes to go. Johnson fumbled the ball on the first play on the resulting drive, giving the ball right back to Wyoming.

Starting on their 8-yard line, an 88-yard pass play placed the Cowboys just four yards from the endzone. They converted an 18-yard field goal after the FAU defense stopped them on three consecutive run plays. With 15 minutes to go, Wyoming led by just one point.

Whitehead’s kick return to the 26-yard line left 74 yards of field for the Owls to cover in only eight seconds. The multiple laterals were rendered futile and the Owls left Laramie with a gut-wrenching 20-19 loss.

Johnson finished 14-of-28 for 99 yards through the air. Running back Jay Warren finished with 108 yards on 22 carries, averaging a  remarkable 4.9 yards per carry.