“Transformers: Age of Extinction” will hit theaters this summer to kick off an exciting new installment with some new faces. 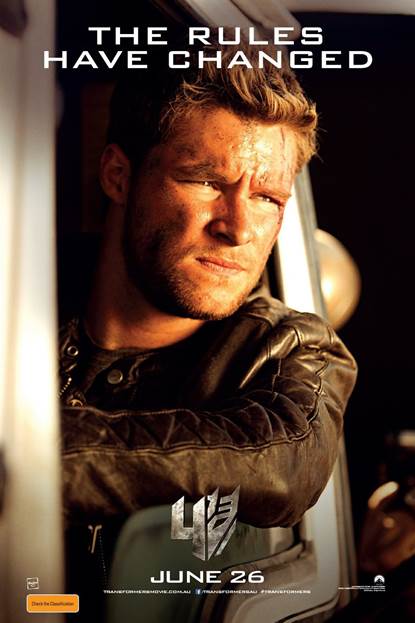 Fans of the “Transformers” saga, there is a new film for you to see. This summer the long awaited “Transformers: Age of Extinction” will be hitting theaters. This newest film takes place four years after the events of “Transformers: Dark of the Moon” and is the first film in a series that will feature a brand new cast and storyline following Mark Wahlberg, Nicola Peltz and Jack Reynor.

The movie is set to have as much action and excitement as the past films and fans will be sure to fall in love with the new actors. On March 26, Nicola Peltz and Jack Reynor took part in a press conference, answering questions and giving details of their experience in joining this beloved franchise.

The UP joined the conference call with 11 other schools to interview the two stars:

Q: Were there any challenges acting alongside CGI characters, and if yes, what were they?

Jack Reynor: Ok, yes, well I mean I can start that one off.  For me, coming from, you know, independent film, which is my, kind of, world that I came from really.  I came from very small budget movies. That’s not something that we generally have to deal with.  So for me, at least, it was a big challenge to step onto such a monumental franchise like this and have to try and react to something that wasn’t there.

And you really have to rely on your imagination in that circumstance, but I think that with Mark’s [Wahlberg] experience in the industry, and particularly on “Ted,” that’s something that he’s phased by at all, and his commitment to it was something [that] gave Nicola and I an awful lot of confidence in using our own imaginations to bring the world to life.

And on top of that, Michael Bay has an incredible energy about him as well, and that’s very infectious.  So it was something that we both managed to get over very quickly I think.  But at the start, I think it is quite an intimidating thing.

Nicola Peltz: Whatever Jack said is completely true.  You’re doing these scenes and you’re doing them against a pole, and then it’s either Optimus’s face cut out, taped to the top, or Bumble Bee, and Michael always said, “You might feel silly doing it, but you can’t hold back.  You’ll have to completely go for it.”

When Jack and I saw the 11 minutes at CinemaCon, it was so exciting for us to see what Michael added into the mix, and he’s just a genius how he brings these robots to life.  And it’s so fun for us because we don’t see it on the day, and when we see it after Michael edited it, it’s mind blowing.

Q: I was wondering when you guys found out that you were going to be part of the new “Transformers” movie, did you guys, kind of, study the first three with Shia Labeouf and that Michael Bay had done previously to, kind of, orient yourself to the universe, or did you try to maybe distance yourself from those because you wanted it to be a new chapter?

JR: Yes, you know, I certainly would have gone back and watched the previous films just from an entertainment perspective, really, more so than anything else, and to just watch it stipulates [being] part of a “Transformers” film.  But from that point, I certainly wanted to separate myself from it. This is a very different series to the previous one and it’s something that’s quite original, and it involves different themes and a lot of new elements.

So for me, I went back and I looked to the previous films, and I maybe reflected on them a little bit, but from that point, it was very much an original process for me.

NP: I knew the “Transformers” films very well because I’m a huge fan of them and they’re so brilliant.  And yes, Jack and I definitely watched them again just for fun because, you know, they’re such great films.  But this movie, our characters are different.  I play Mark’s daughter, and it has such an amazing human element to it. The father/daughter story is so wonderful, and just — there’s so much heart involved in this film and that’s what was so much fun for me.

Q: Since “Transformers” is always known for having their fast scenes and there’s action behind every corner, did you guys have to go through any special physical training prior to the movie filming?

NP: Yes, Jack and I did what they call boot camp the month before filming and we really got in good shape.  We did boxing and a lot of cardio, and I mean, I’m so glad we did it because there is — I never realized, until I got to set, how much running is involved.  We’re running everywhere and it’s — you have to be in shape, and it helped me so much.

JR: Yes, it’s very physically demanding shoots and I think it’s important for you to do a lot of training when you’re part of a “Transformers” film because psychologically it’s very healthy for you, and it grants you a little bit more sleep in the evenings than you might normally get. Those are two very important things when you’re part of this film because in a lot of ways, physically, mentally, and psychologically it’s — yes, [it’s] just, kind of a hard process to go through.

But we had a lot of support on it as well, you know, and it was all good for — yes, we did a lot of training.  We did stunt training too, which was fun.  So we were on wires and kind of suspended. That was an interesting experience also.  And I learned how to drift too, which, as it happens, is kind of a physical thing to do as well.  You really need to get into that.  So yes, that was what we did.

Q: Can you comment a little bit more on the relationships of Shane and of Tessa with Mark Wahlberg’s character?

JR: Well yes, you know, I think Shane and Tessa are two young people who are very much in love with each other and they’d kind of like really do anything for each other.  And Nicola will tell you about her character and her relationship to this dynamic [between these] three people.  But for me, my character’s a young guy, he’s a race car driver, and he’s kind of displaced in the world that he’s in.

I don’t think he really belongs there.  He’s a little bit of an outsider, but he has a confidence in his own abilities as a driver that allows him to be grounded in that world, and it’s what anchors him there.  But on top of that, like I say, he has a really strong commitment to this relationship.

At first, when it’s disclosed that Tessa is in a relationship with this guy, Mark’s character isn’t really a big fan of the idea, but as we progress through the film, I think Shane and Cade start to develop a mutual respect for one another just by seeing the commitment that they have to preserving her health and her safety.

NP: Yes, and I play Tessa, Mark’s daughter.  My relationship with Mark is as so many teenagers can definitely relate to.  You know, he’s the overprotective dad, it’s a no dating household, and she has a secret boyfriend that she does not want to tell her dad about.

So, in that first scene when they meet each other, it’s so funny, and it’s — a lot of people can relate to it, which is also great. I love playing that dynamic. And Jack and Mark, you know, their dynamic was so funny, and just — it was so fun to watch — to watch them do their back and forth dialogue.  It’s pretty funny.

“Transformers: Age of Extinction” will be in theaters June 27 and the trailer and other updates can be viewed at http://www.transformersmovie.com.