Chick-fil-A is one of the new dining options coming to FAU in fall 2014, according to a tweet from FAU Dining Services on May 1.

Vice President for Executive Operations and Chief of Staff Stacy Volnick has confirmed that the new Chick-fil-A will be located in what is now Einstein Bros. Einstein Bros will be relocated to the Breezeway food court, replacing Quizno’s.

However, this isn’t the first time Chick-fil-A has come to FAU.

In October 2011, Chick-fil-A was a vendor at the FAU stadium. The relationship was short-lived when the restaurant failed to meet service expectations, with students waiting in line for 30 minutes.

Also, Chick-fil-A was mentioned in connection with FAU in April of 2013 when former Athletic Director Craig Angelos criticized administrators for passing on a sponsorship opportunity with a local car dealership stating that FAU was holding out for deals with bigger companies such as Chick-fil-A or the GEO Group, a private for-profit prison group. When FAU decided to partner with GEO Group last year, students protested due to the prison group’s record of human rights violations.

After not wanting a repeat of the GEO Group protests, FAU administration met with FAU’s gay/straight alliance group to get their opinions on Chick-fil-A coming to FAU dining.

“We appreciate the consideration of Dr. Brown and Ms. Volnick in their communications with us, we do not support Chick-fil-A coming on campus, but as an organization we will not be taking any official action at this time in regard to this deal pressing forward,” Lambda United wrote in an official statement. 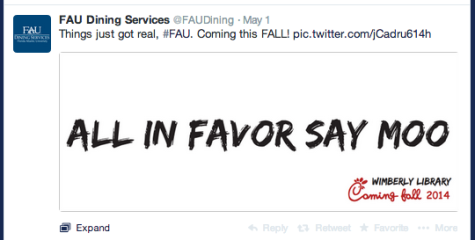 In 2012, Chick-fil-A’s COO Dan Cathy made statements to the media regarding his negative stance on same-sex marriage. Also, in 2011, tax records revealed that the restaurant had donated millions of dollars to anti-gay groups.

Since then, Chick-fil-A has been making efforts to rebrand themselves by ceasing their donations to anti-gay groups.

In addition to Chick-fil-A, FAU will be adding JJ’s Red Hots, a hot dog restaurant from North Carolina, to their dining services.