FAU hosts and runs its own internationally known organization for presentations called TED-X. 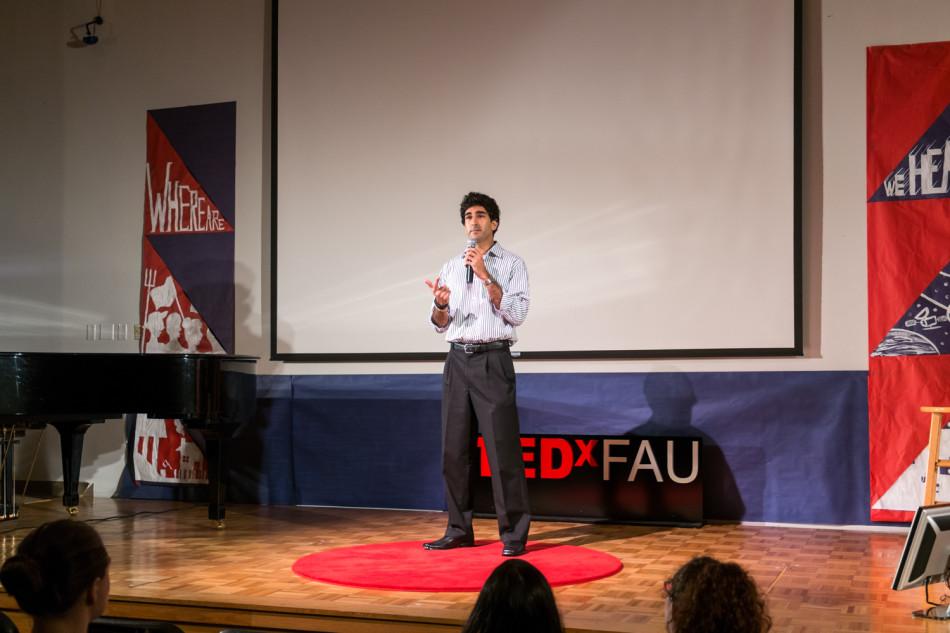 Whenever scientists, celebrities or even just people tinkering in their garages think they have something amazing and inspiring to share with the world, they do it at a TED talk.

These were the kinds of people at this year’s TEDxFAU on FAU’s Jupiter campus on Friday, April 18.

According to its website, “TED is a global community, welcoming people from every discipline and culture who seek a deeper understanding of the world.”

TED talks are internationally known and consist of presentations by big-time scientists and ordinary people with interesting skills or ideas.

“TED talks are a valuable platform for spreading ideas and learning,” said John Stahl, a senior health care administration major and host of the event.

The auditorium was about half filled with presenters, students and community members interested in what others had to say about this year’s theme of “Where Are We Headed?”

The event started around 9 a.m., with the first of nine presenters, a futurist (someone who tries to explore the present and predict what the future could be like) from Disney named Joe Tankersley. Tankersley talked about how simply trying to look into the future can affect our present minds and cause us to change the present.

The second presenter was the host of the event, John Stahl. Stahl’s presentation was about how video games can help increase people’s mental capabilities for critical thinking and creativity as well as help people to use failure as a motivation. Stahl explained how certain video games, such as “Starcraft” require a lot of strategical thinking and playing these games can often help gain mental skills, the same way that someone would playing chess.

Stahl was happy to host this year’s event and had a specific reason for hosting and organizing TEDxFAU.

“I wanted to host this year because last year there wasn’t enough Boca Raton involved,” Stahl said. “[I] want to see the event grow and see more students come out.”

Another presenter, Leigh Clay, did a unique presentation on religion. As an atheist who is against getting rid of religion, Clay’s main point was that people are the problem, not religion. Whether a society is based on religion or science, it is still the people interpreting what’s there.

The rest of the presentations consisted of topics such as the art of listening, cyber security, cyber attacks and how much fun therapy can be.

TED talks are tools to help spread interesting ideas and encourage people to share their own. Anyone could benefit from watching these varied and wide-ranged presentations. If you missed the one on the Jupiter campus, there is a TED-X talk on the Boca Raton campus on May 9.