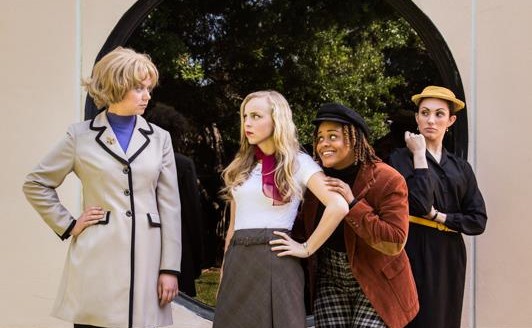 I see your ombre hair and raise you one pair of high waisted shorts.

Non-conformity is hard guys, even after college. But FAU’s Theatre and Dance department has just the thing to help: “Rhinoceros.”

“They actually did a very good job,” said Harolb Petion, a junior theatre major who worked behind the scenes backstage. “[It’s relevant] how it transformed from a comedy into a social commentary.”

“Rhinoceros” plunges through the main character Berenger’s journey (portrayed by grad student Sujotta Raquel) as those in her unnamed French town become rhinoceroses one by one.

Like any normal person, Berenger struggles with the craziness of this on top of her own personal troubles, including alcoholism, all the while being looked down upon by her friend Jean (Jenna Wyatt).

The play focuses on the transformation of the town’s citizens to rhinoceroses, which at first is just seen as a contagious disease. However, after the second act, it becomes clear that those afflicted are transformed because of their own way of thinking.

“It becomes a disease, almost, when people all are the same,” said theatre graduate Jane Lynch, who thinks the play is relevant to today’s culture, “just in any aspect.”

For Lynch, the most powerful moment she saw in the play was the ending monologue delivered by Berenger, full of frustration and confusion at witnessing those around her transform.

“I think it really portrays the pressure to conform,” said Petion.

The pinpointed lighting and sudden spotlight blackouts throughout the show work together to build up the climax.  Pointed character reactions to musical chimes from the second act give a type of suspended animation to the characters, boosting the philosophical vibe the play gives out.

While positioned on the mesh guardrail above the audience’s heads, the chorus serves up an omnipresent feeling for the set, especially at the plot points where they play traditional drums to mimic rhinoceros stomps.

The music and acting stood out graphically against the grayscale stage backdrop that had pops of color scattered in — dots of orange and periwinkle blue accented the background as buildings, but allowed a bland enough effect for the audience to still focus on the actors and the play’s theme of conventionality.

The only furniture onstage was built out of tetris-shaped blocks that moved around to resemble tables, chairs and beds. Prop use was minimal, consisting of only small home items like water glasses and a rotary phone.

All in all, this play will cause the audience members to think about themselves and their view of society and social conformity. However, if psychological analyzation and social commentary really isn’t your thing, it’s worth going to experience the chorus and character delivery of the all-female cast.