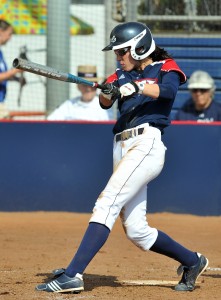 The softball team’s best hitter did not have the easiest path to FAU.

Senior Heather Barnes, the 5’9” brunette second baseman, came here last spring from a community college, with merely a chance to make the team as a walk-on. Head coach Joan Joyce issued no guarantees of playing time.

So, Barnes earned it.

Last season, she led FAU with a .318 batting average, but she does not take her talent for granted, not after two shoulder surgeries — one in high school at Avon Park, the other during her freshman year of college playing for Stetson University.

The shoulder still jumps out of place every once in a while, according to coach Joyce, but Barnes is determined to push through the injury. It’s one that initially had her doubting whether she’d ever play again.

“She’s definitely the toughest person I know,” teammate and roommate Quincy Wilson said. “I know how much pain she goes through because I go through the same amount (Wilson has been through multiple knee surgeries). She’s tough as nails.”

This past off-season, instead of relaxing, Heather decided to work on her swing, while rehabbing her shoulder every week.

“Her dedication with hitting is over the top,” Joyce said.“When she was on break over the Christmas holidays, she was out constantly hitting at home.”

“The pitching between community college and here is totally different,” Joyce said. “The movement on the ball in Division I is much greater.”

That didn’t stop Heather from racking up a 15 game hitting streak last season. Not that she wanted to be reminded of it while it was going on.

Heather calls herself a “stat nut.” She keeps track of her statistics, even claiming to this day that she can remember her numbers and totals from high school. She jokes that her hitting streak last season was halted due to a jinx.

“I said if [media relations] put this on the website then it’s going to ruin my hit streak, I know it,” Barnes said.

The next game, she went hitless.

Being one of the best players on the team, though, it would be easy for Barnes to be loud and confident. Instead, she lets her play speak for itself, and at the same time she attempts to inspire her teammates vocally.

“She’s a great leader, she motivates you,” Wilson said. “I’m the captain of the team but I feel like she’s my co-captain.”

“She leads by example of her work ethic on the field,” Joyce said. “She will voice her opinion. Some kids are shy about that. Heather has no problem with doing that, which is a good thing.”

According to Joyce, Barnes is a testimony that hard work pays off.

“If I had 19 more Heathers then we would know exactly what we’re doing out there,” Joyce said proudly.

Barnes was inspired to play the game by her father Ronnie, a sergeant, and her twin brother Heath. Growing up, she admired Heath and wanted to follow in his footsteps.

The workaholic senior will miss not just softball and her teammates, but something else that comes with the college experience.

“I made my mind up within the first 10 minutes in there that I want to work with special needs kids,” Barnes said. “I absolutely adore them. It’s the most rewarding thing I can do. Even if I just work with them for an hour or so, I absolutely would love working with them.”