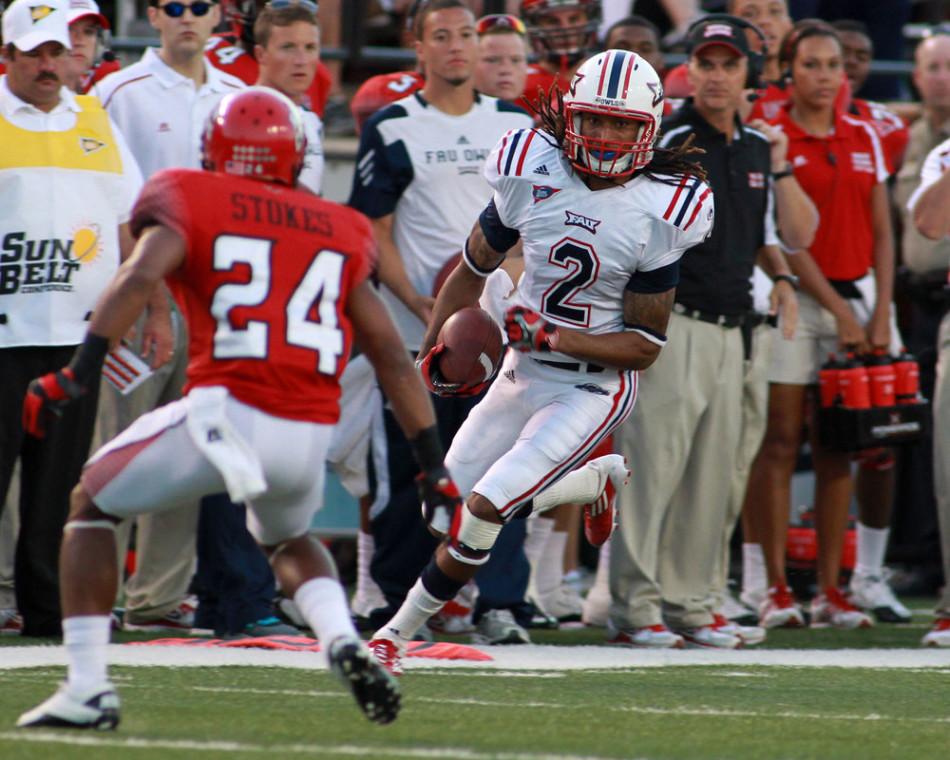 FAU played its most competitive game of the season, but came away without a win for the fourth straight time.The Owls had 20 points at the half, as much as they scored in their previous 3 games combined. Despite the offensive outburst, the Owls were unable to pick up the win, losing to Lousiana-Lafayette 37-34 at Cajun Field.A 26 yard field goal by Rajun Cajuns kicker Bret Baer as time expired gave ULL the win.

With the ball back and the score tied with 1:48 to go in the game, Rajun Cajuns QB Blaine Gautier dissected the Owls defense with 6 completed passes on the drive to set up the game-winning field goal. Wide receiver Harry Peoples bobbled and tipped a catch for 25 yards to the FAU 25 yard line that would put a dagger in the Owls hopes of securing their first win of the season.

The Owls rallied from 14 points down to tie the score at 34 with 1:48 remaining in the game. Quarterback Graham Wilbert quickly marched the Owls down the field on a 5 play, 40 yard drive that resulted in a 12 yard touchdown reception on fourth down by running back Xavier Stinston.

On the drive before, FAU quarterback Graham Wilbert started the comeback by completing 4 passes for 53 yards, the last of which resulted in a 5 yard play action pass for a touchdown to tight end Nexon Dorvilus, cutting the lead to 34-27 with just under 6 minutes remaining in the game.

Midway through the third quarter, Owls defender Marcus Bartels 236th career tackle broke a school record for most tackles by a safety.

FAU’s defense started the game with a 3 and out, but a roughing the kicker penalty led to a Rajun Cajuns first down. The Rajun Cajuns would make the Owls pay, as wide receiver Harry Peoples leaped over two FAU defenders for a 31 yard touchdown reception later in the drive to give ULL the first points of the game.

It was a penalty plagued first half for both teams, with each having 7 a piece. Miscues by the Rajun Cajuns led to 10 points in the first quarter for the Owls.

A late hit in the first quarter committed by the Rajun Cajuns on a punt return gave the Owls prime field position at their own 45 yard line. Four plays later, the Owls would capitalize. On play action, FAU quarterback Graham Wilbert rolled out of the pocket and found tight end Darian Williams for a 24 yard touchdown.

Owls wide receiver DeAndre Richardson scampered for a 37 yard run in the 2nd quarter, FAU’s longest play of the season. It would set up a 6 yard touchdown by running back Alfred Morris, his second of the year.

Wilbert delivered his most efficient game this season, throwing 219 yards along with 3 touchdowns.

FAU will conclude its 5 game road stand next week at North Texas before entering the new stadium the following week vs. Western Kentucky.