Millions of dollars for half a minute 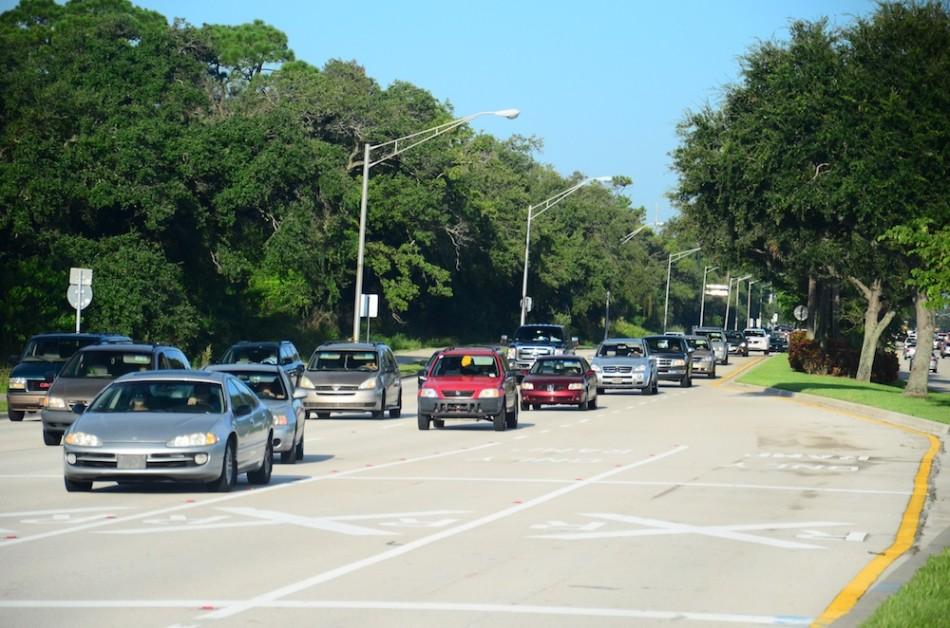 County Engineer George Webb told the UP that traffic delay at the Palmetto/Military intersection was 200 seconds, and widening Palmetto would decrease that to 145-150 seconds. Photo by Christine Capozziello.

Senior accounting major Ashley Love’s morning commute to FAU is 15 minutes. If the county widens the road she takes daily, she could shave that commute down to 14.5 minutes, according to a county official.

Love, however, has another take on it. “It’ll take longer to drive through while it’s under construction,” she said.

Love takes Palmetto Park Road, which is currently the center of a controversy between Palm Beach County and Boca Raton, to school each morning. In December, county commissioners will vote on widening a strip of Palmetto west of St. Andrews Blvd. to I-95. According to County Engineer George Webb, the widening would save commuters 30 seconds. Love lives near that strip.

If approved, the county and the Florida Department of Transportation (FDOT) will both fund the $6.5 million project, Webb told the UP.

Kristine Frazell-Smith of PBC’s Roads Production Division, told the UP that the construction contract will be awarded in December, and construction would start in the spring.

In May, Boca councillors passed a resolution that, among other things, stated it would sue the county to stop the project, if necessary.

City Attorney Linda MacLaren told the UP that conditions for filing suit won’t be known until after a Sept. 15 meeting between city and county officials regarding the project. The meeting will take place at the county commissioners’ chambers in downtown West Palm Beach.

The project would save each commuter going past Palmetto’s Military Trail intersection 30 seconds, said Webb. “30 seconds times about 8,000 users a day [during peak hours] is a total savings of 240,000 seconds [over 66 hours] each day. Would you rather have a two minute delay at the intersection, or a one-and-a-half minute delay?”

At an April Boca Council meeting, city officials criticized eight-laning Palmetto because it would remain at a service level of F, which means the road has the lowest grade in traffic congestion, according to county standards. It would still be an F after the widening.

Webb told the UP that Military would have to be raised over Palmetto for the latter road to receive a grade above F.

Residents at the April meeting said they were also worried about more noise from additional traffic, but Webb said Palmetto Park traffic has decreased over the past few years.

Webb told the UP he believed traffic would increase in the future.

According to Boca Traffic Engineer Doug Hess, city officials are also opposed because part of the county-FDOT agreement states the project must alleviate Glades Road congestion.

The UP found no such rule in the agreement.

In June, the Boca Del Mar Improvement Association’s Board of Directors voted unanimously to oppose the widening. BDMIA governs Boca Del Mar, a Boca community with nearly 25,000 residents, according to BDMIA website bocadelmar.org.

Ashley Love also had an opinion on the widening. “I think it’s a waste of money,” she said.

The Sept. 15 meeting between city and county officals takes place at 1 p.m., and is located on the sixth floor of 301 N. Olive Avenue, West Palm Beach. The UP will cover the meeting.